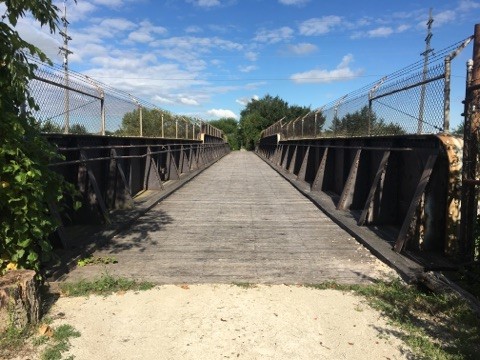 Iron Bridge as viewed from the east side of Henslow's trail today. 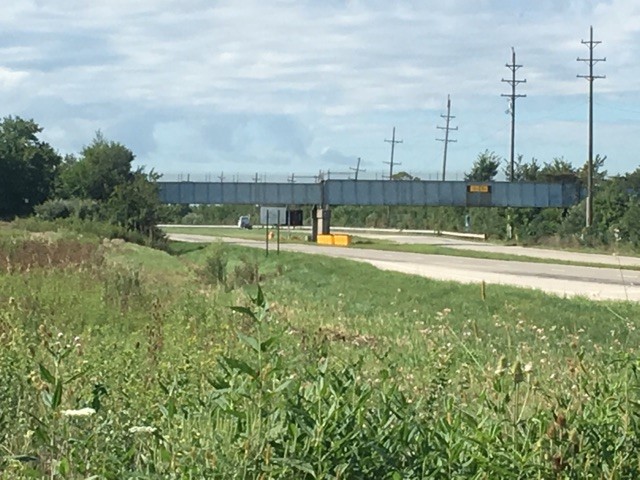 Iron Bridge as seen from the trailhead entrance.

The bridge you now stand next to carried, by train, over 1 billion lbs. of TNT from 1940 to 1977. Trinitrotoluene was produced in factories and then cured in bunkers at the Kankakee Ordinance Works on the west side of Route 53. After the curing process was complete, TNT was moved by train over the iron bridge to production lines at the Elwood Ordinance Plant on the east side of Route 53. The TNT was taken to one of four “Load, Assemble, Pack” (LAP) buildings. At these large production lines, TNT was turned into the munitions needed for WWII, the Korean War, and the Vietnam War. The munitions were then stored in bunkers on the east side of Route 53 until they were shipped to the military. The bridge is now part of the 5.2 mile Henslow Trail. This multi-use trail, in part, utilizes old rail beds and roads from the arsenal era.

Henslow Trail is distinctive in the habitats and features you encounter as you travel its length. If you begin your trek at Iron Bridge Trailhead, you move through a woodland of black locust that was once a farmstead. Then, travel on through a small area of restored prairie until arriving at the Northwest corner of the bison pastures. After crossing the Iron Bridge, you move through grasslands that are maintained at specific heights to help endangered and threatened grassland birds species such as the upland sandpiper, loggerhead shrike, and eastern meadowlark.

Next on the itinerary is savanna habitat. On a savanna, you find rolling hills with shrubs as well as widely spaced individual bur oak trees. Grassland birds are also found on a savanna, but also look for red-tailed hawks, red-headed woodpecker, and bobolinks. At Prairie Creek, you have reached the halfway point of the trail. Continuing on this north/south section of trail you pass through a restored wetland known as Foxglove Prairie. Here is an area where frog and toad monitoring is done by volunteers. Don’t forget to stop and listen for frogs singing.

The final east/west stretch of Henslow Trail winds through South Patrol Restoration Project. This is 500 acres of restored tallgrass prairie that is slowly maturing year by year into the tallgrass prairie it once was. Keep your eyes peeled for beaver and mink that frequent the creek that parallels this trail. Finally, you arrive at the River Road Trailhead where many of Midewin’s native seed beds are located.