Note the round concrete foundation of the silo. Silage is grass or other green fodder compacted and stored in as close to airtight conditions as possible, typically in a silo, without first being dried. It is used as animal feed in the winter. The foundation you see suggests a round stave silo. Round, wood stave silos, held together with metal hoops and fed by mechanical elevators, were common by the early 1900s.

The image shows a silo, much like this one, under construction with the first few staves in place. Alvin Schumacher does not recall the silo from his boyhood and it may have been from an earlier property tenant. Though silos are icons of Midwestern farms, their use was not universal. Arthur Schumacher was but one of many very successful farmers who apparently never used a silo or silage. 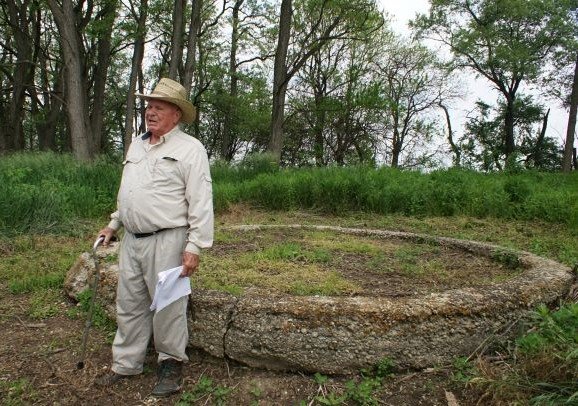 Robert beside foundation of silo used by previous farmers.