"the first post house at which we stopped for breakfast was a rude log cabin. Our detention during the night had prevented our arriving at the usual breakfast hour, and it was supposed we had taken our meal elsewhere, and of course we were obliged to wait. 'Breakfast ! Breakfast !' was the cry of the driver and passengers, as we alighted. 'Aye, aye!' returned the landlord." 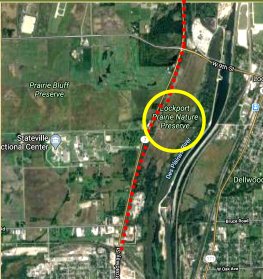 First inhabited place they see is likely Justin Taylor’s farm (possibly their breakfast stop). It marks the northern most of several farms that were on that stretch of road in 1840.

Then..." 'All aboard !' cries the driver, and we were again upon our course, our horses prancing gaily as if refreshed by their breakfast. A tree appeared against the horizon, looking exactly like a sail in the distance--others followed it, and soon beautiful groups of forest trees were sprinkled over the prairie in front. This was a token of the vicinity of water, and in a short time we found ourselves on an elevated bank from which we looked down upon a verdant valley through the center of which, ran a silver stream. This was the valley of the Des Plaines--having every appearance of being the bed of a broad and deep river."

About 10 miles south of Justin Taylor’s they arrive at Joliet:

"Upon the opposite shore of the river and in this vale, at the foot of the ancient bank, stands the pretty town of Joliet, improperly spelt Juliet."

"We re-crossed the river where we found the newer part of Joliet built in a solid manner, of the yellow limestone which is quarried here. The sides of the canal, and viaduct were also formed of this pretty stone, which gives quite a gay look to the place."