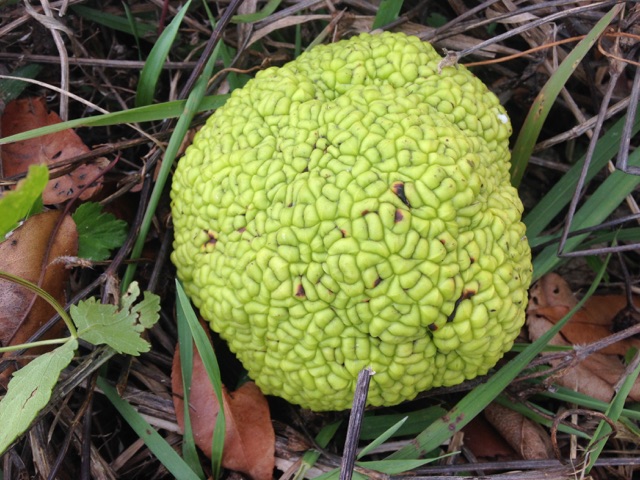 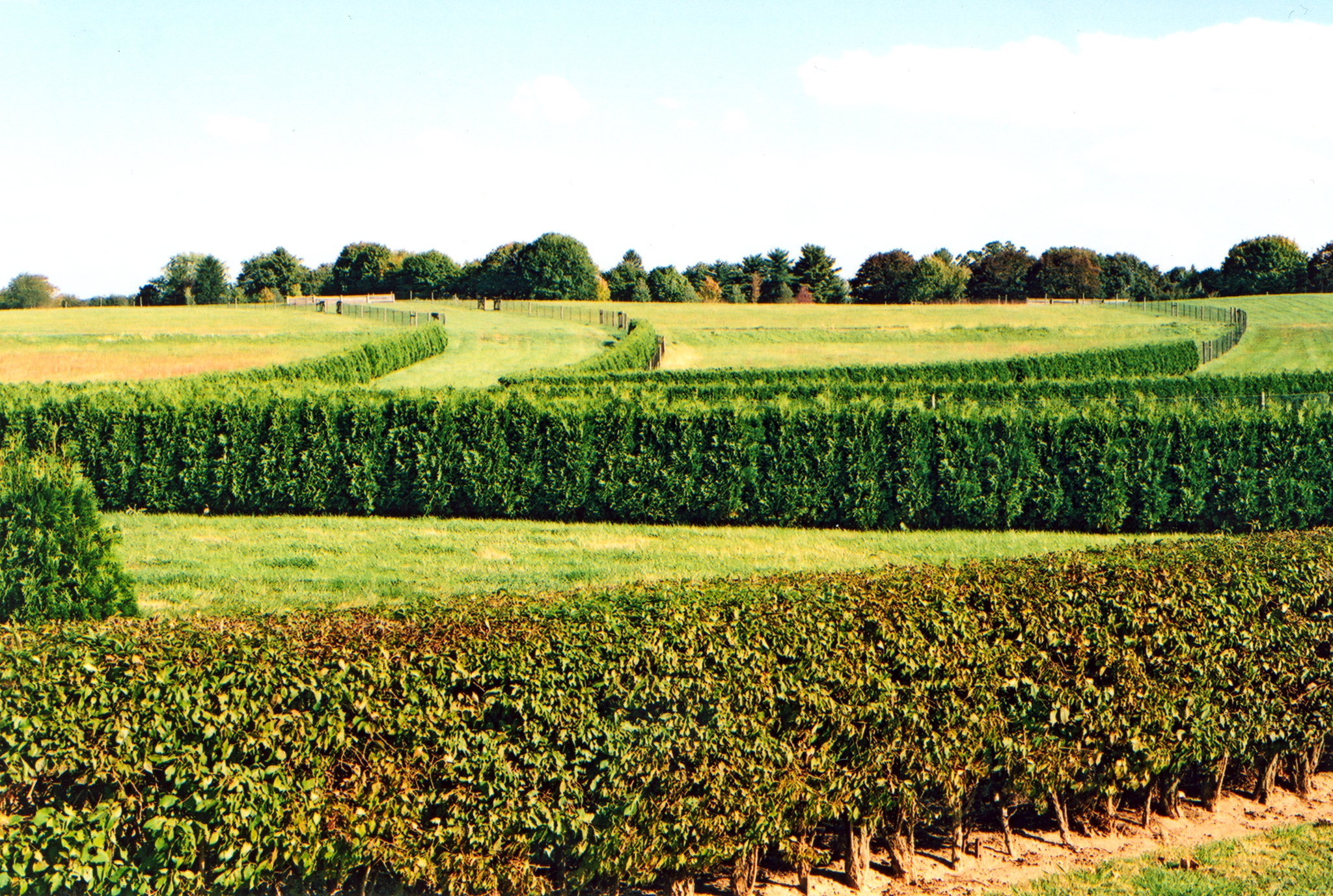 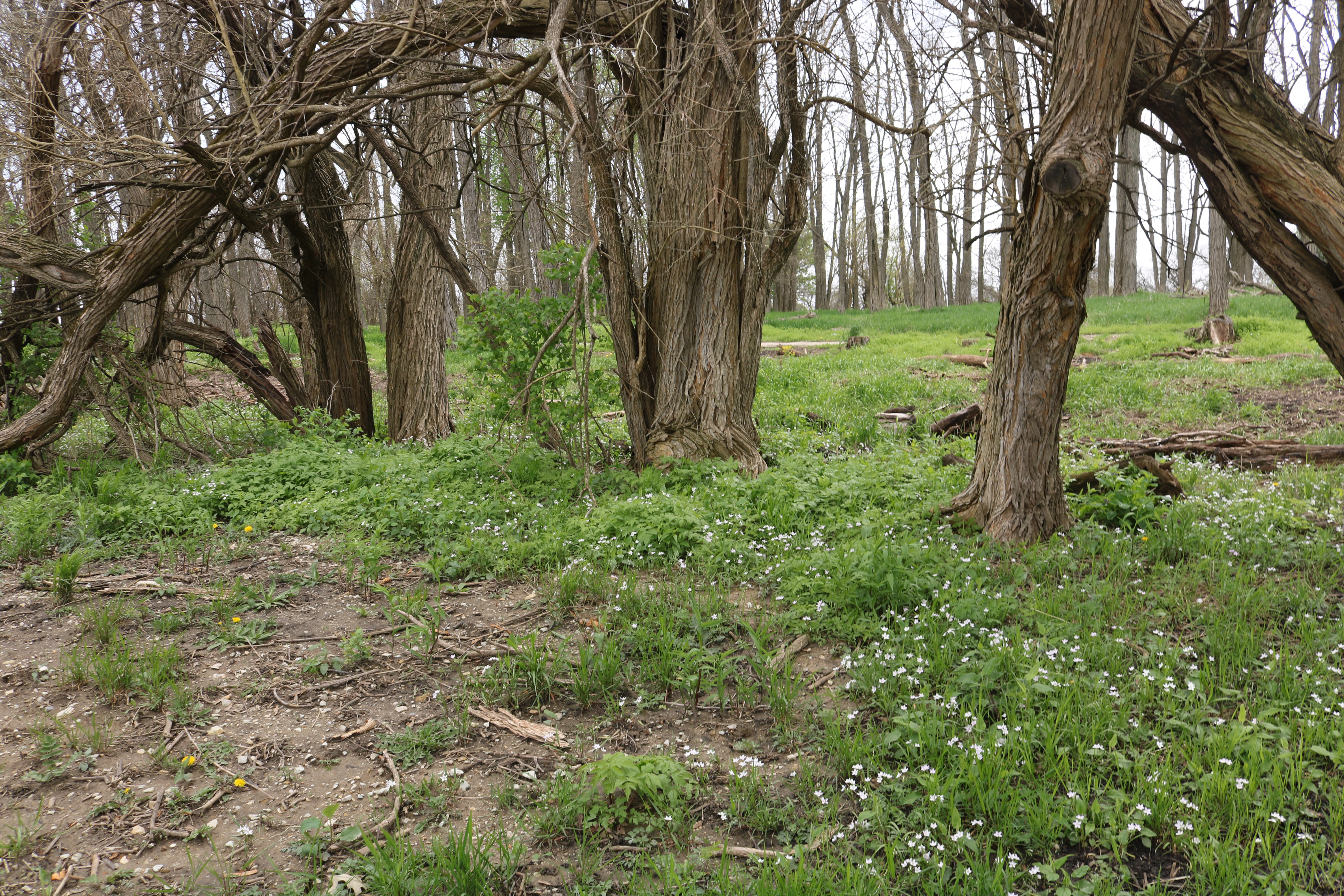 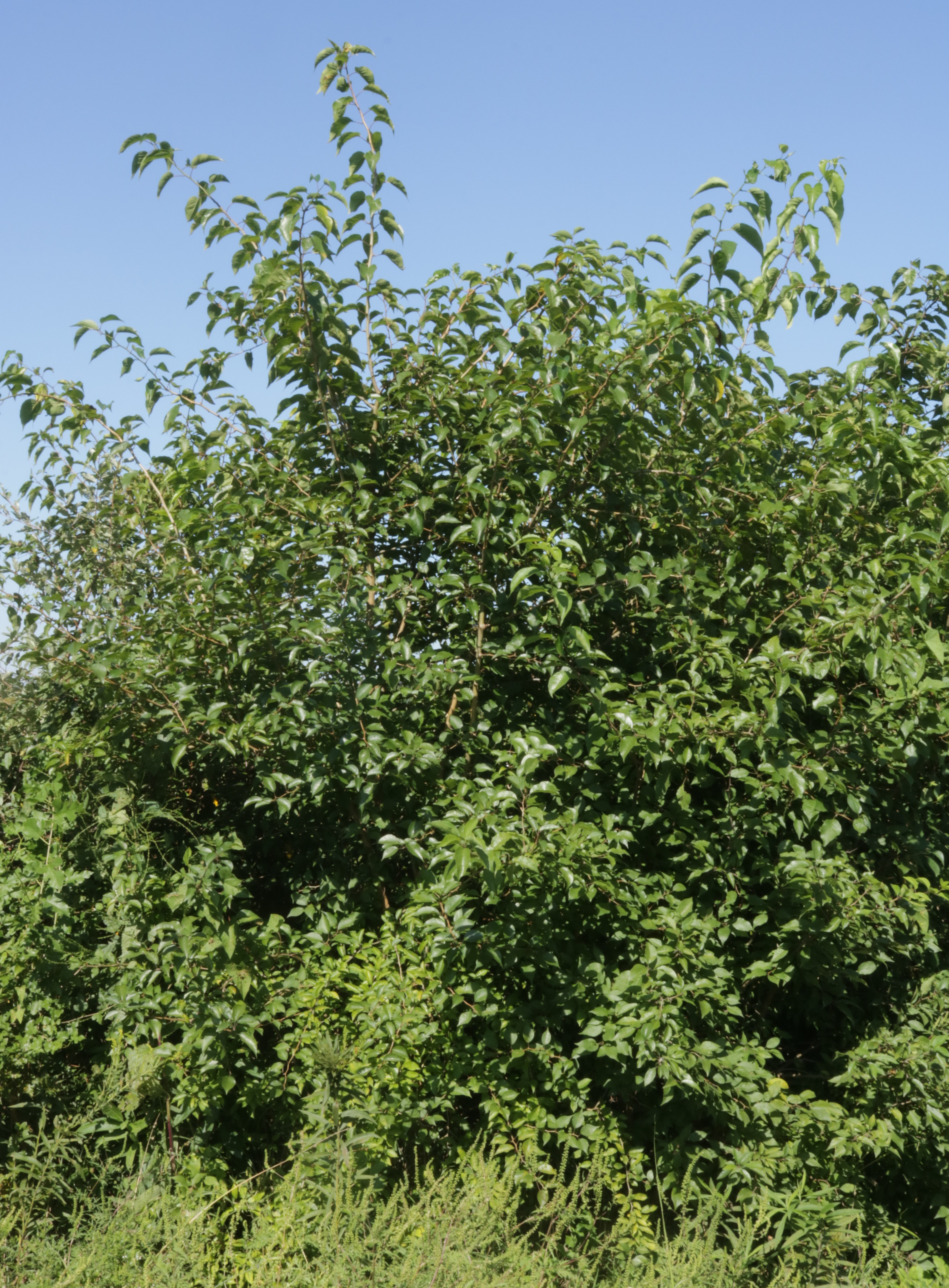 Look above you. The tree that towers above you now is the Osage orange tree.  The straight Line of trees you see were planted to act as a fence. The hedge apple has a vibrant orange inner bark. The fruit of the tree is neon green and the size of a grapefruit with a very bumpy surface. Osage orange tolerates poor soil, extreme heat, strong winds, is easily transplanted, and has relatively few insect or disease problems. Young trees and new growth on trees have sharp ½ to 1 inch thorns. Thorns, its dense growth when pruned, and its ability to survive extreme conditions are the reasons this tree came to the prairie.

Settlers needed to keep their livestock away from their crops and the railroad tracks. On the prairie, trees were scarce and wood was a precious commodity. Building fencing to contain cattle was an expensive proposition. Split rail fences were expensive, $500 per mile. A prairie fire would easily destroy the costly fencing, sending all a farmer’s hard work and money up in smoke. Wire fencing at the time was brittle, not galvanized, causing the wire to rust and easily break. In the 1840’s, a movement to use these thorny trees as fencing began. Illinois was the first of the prairie states that introduced the Osage orange as a living fence. From there it spread to other Midwestern states.

By 1855, 1,000 bushels of Osage orange seed was shipped from Texas and Arkansas to Illinois. Seed cost as much as $50 per bushel. In 1858, in the book “Hedges and Evergreens”, John Warden wrote, “It is no longer a matter of experiment, whether the Osage orange will make a fence or not. It is a proved fact that… a hedge can be grown in four years, so compact that no kind of stock can pass it.” Osage orange trees grown closely together and pruned were considered “bull strong, hog tight, and horse high”. This meant a bull couldn’t push through the thorns, a hog could not get through the tight growth, and a horse could not jump over it.

This living fence needed to be pruned to a height of three to five feet tall annually. Trimming this tough wood was dangerous work. Gangs of hedge cutters traveled the state using sharp scythes to keep the trees short and encourage new growth which is where the thorns occur. This row of trees was pruned by the Shumacher family who farmed the land. By 1870, 70% of Kankakee County, Illinois prairie fencing was Osage orange. Living fencing was popular for about 25 years.

Barbed wire came onto the farming scene at the 1873 DeKalb County Fair in Illinois. Barbed wire required less maintenance. Fencing did not require the yearly pruning of miles of trees. Additionally, precious water for crops was not used by Osage orange trees especially during periods of drought. Where did these living fences go when barbed wire became the rage? Look up at the trees you are standing under. When pruning stopped, trees grew to their mature heights of 40 to 60 feet tall with a crown spread of up to 40 feet. This line of Osage orange trees were once a fence. After barbed wire was introduced, farmers still used these trees as rot resistant fence posts, for wind breaks, and as a heat source because its wood burned hot.

This tree is not native to the tallgrass prairie of Illinois. These trees are native to the Red River Valley of Oklahoma, Texas, and Arkansas. Osage Indians used this strong yet flexible wood to make prized bows. It is recorded that one bow made from the Osage Orange tree was traded for a horse and blanket, showing how great of a value was placed on a bow made from this tree. French trappers called these trees “bois d’arc”(bwă-därk). It means “wood of the bow”.

An Anglicized corruption, of this French name, is bodark(bō-därk) or bodock(bōdŏck). Other common names for this tree are hedge apple, Osage apple, Osage orange, and horse apple. Wazhazhe(wăzhăzhā) is the name given to this tree by the Osage Nation. The wood from this tree was valued by not only the Osage people but by the Comanches, Kiowas, Pawnees, Omahas, Seminoles, and other nations. This thorny tree is a part of the history of the Illinois prairie. This line of Osage orange trees tell a story about the settlers, who struggled to tame the prairie with fences they grew form living trees.